Last year, the COVID-19 pandemic put a dampener on the excitement of boxing enthusiasts who wished nothing more but to experience the thrill of watching stars battle it out in the ring. But 2022 has been relatively forgiving. Anthony Joshua “AJ” will return to the ring to battle it out with Oleksandr Usyk.

We have all the details you need to know about the upcoming fight. See how iProVPN lets you watch Anthony Joshua vs Oleksandr Usyk on Kodi.

Anthony Joshua aimed to get a shot against Tyson Fury “Gypsy King” in a heavyweight faceoff. But Joshua’s plans were left hanging when an arbitrator decided that Fury had to face off against Deontay Wilders. In the meantime, Joshua has to go through a mandatory title defense against Oleksandr Usyk.

Usyk is a former cruiserweight champion who last faced off against Derek Chisora last year in October and scored a win. Joshua was last seen in December when he scored a knockout win against Kubrat Pulev. This will be Joshua and Usyk’s 2022 debut.

The two Olympic gold medalists hope to land a victory to secure this as a highlight of their respective careers. But only one will walk out of the ring as the heavyweight champion.

Joshua will return to his home country for the fight. The fight takes place in Jeddah Super Dome, near Madinah Road, Saudia Arabia. Sky Sports will run the highly-anticipated Anthony Joshua vs. Oleksandr Usyk broadcast on 20th August 2022.

The time for the grand fight is speculative for now. It depends on how the undercard unfolds that day. But it is expected that the main event will begin at 9:00 PM or 9:30 PM BST.

How to Watch Anthony Joshua vs Oleksandr Usyk 2 on Kodi

Kodi is a perfect media streaming application if you want to watch Joshua vs Oleksandr live online.

The broadcast will be available over the internet via Sky Sports Box Office. The digital streaming service is focused on sports and has been an exclusive broadcaster for many notable fights in the few years gone by.

Kodi and Sky Sports Box Office are the perfect companions for you. As a digital service, Sky Sports Box Office is unavailable in many parts of the world. Currently, the list of supported countries includes the United Kingdom and the Republic of Ireland. However, it’s nothing that iProVPN cannot help you overcome.

How to Setup Sky Sports Box Office on Kodi

Kodi 19 is the major release of the application. The official website of Kodi has delisted Kodi “Leia” now. We have added a source from where Kodi v18 can be downloaded. If you do not see your device, try searching for it online.

iProVPN supports Windows, macOS, Android, iOS, and Fire TV OS via dedicated apps. If you are running Kodi on a different device, then set up the VPN directly in the router. We have compiled a list of tutorials for several routers, which you can find on our support page.

Once you have all that figured out, it’s only a matter of waiting for 20th August 2022. Joshua must put his heavyweight titles on the line or risk losing them. While Usyk has not yet earned a heavyweight championship, he has held all the belts in the Cruiserweight category.

There is no telling when Fury and Joshua’s face-off will take place. The former is set to face Deontay Wilder for the third time in October. Until the time comes, the upcoming fight will serve. 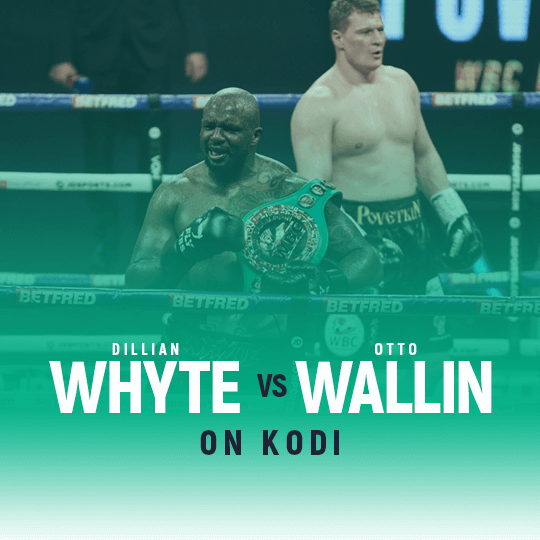